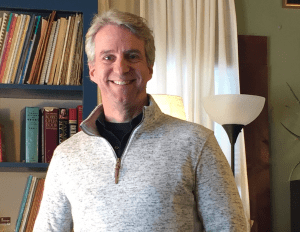 Dr. Jeffrey Ballard, Tenor and Pianist, has had a versatile and wide-ranging career in music as a performer, professor of music, and teacher of singing. He was born in New Orleans (home of his favorite coffee shop in the world – the Cafe du Monde). As the eldest son of a lifelong minister, Jeff traveled widely in his youth and lived in most of the southern states. While a young boy, he began his musical studies as an instrumentalist, commencing with piano lessons in South Carolina in 1972 and adding the trombone the following year. His senior year in high school culminated in his being trombone section leader, student conductor, and president of his high school band in northeast Atlanta, where he graduated in the top of his class in 1981.

In the fall of 1981, Jeff began his collegiate career as a piano performance major at Stetson University School of Music in Deland, Florida, studying with internationally distinguished, Juilliard-trained pianist Virginia Hutchings.

Although he had always sung in choirs and even soloed in church on occasion as a youth, it was not until the summer of his freshman year in college that Jeff discovered what would become his life’s passion – singing. This vocal discovery happened rather serendipitously. While at a summer music festival with a friend from Stetson, he was encouraged to audition for a last-minute opening in the tenor section of a select chamber choir directed by Oberlin choral director Dr. Daniel Moe. Dr. Moe was immediately impressed with Jeff’s voice and offered him the position in the tenor section – he was the only teenager in the all-adult choir.

Jeff so enjoyed that experience and the unexpected opportunity that he decided to pursue vocal study. He returned to Stetson for his sophomore year, changed his major to voice, and began his work with voice professor Mollie Rich. After two productive years as a voice major at Stetson, he had another unexpected event happen in the summer of 1984.

While home from college, he was encouraged to take a lesson with former Met soprano and voice professor, Inge Manski-Lundeen, who happened to teach at the area college. He was so impressed with her that he transferred to West Georgia College (now University of West Georgia) to complete his undergraduate degree in voice under her guidance. While at West Georgia, Jeff also studied extensively with pianist George Mann and organist Dr. Robert Coe. He graduated with honors in 1986 and turned down several offers for further study at other music schools (including Indiana University) to continue his graduate studies at West Georgia with Professor Manski-Lundeen, where he served as her graduate assistant and principal studio accompanist from 1986 to 1988. During this time, he made his professional operatic debut as a leading tenor in several productions with the Southeastern Savoyards Opera Company (now the Atlanta Lyric Theatre) in downtown Atlanta. He completed his Master’s Degree in voice performance in 1988.

Jeff then accepted a doctoral graduate teaching assistantship and opera scholarship in voice performance at the University of Southern Mississippi, where he studied under the guidance of national award-winning opera director, David Holley (now at the University of North Carolina at Greensboro). During his five years at Southern Mississippi, Jeff appeared as leading tenor in nearly all the operas staged there, taught studio voice and served as vocal coach/accompanist for the opera theatre program, while also serving as organist at a local Episcopal church. He also performed many principal tenor roles during this time with Opera in the Ozarks of Arkansas, Southern Light Opera of Mississippi, Chattanooga Opera Company (now Chattanooga Symphony and Opera), and at the Bach Aria Festival of New York. He completed his Doctor of Musical Arts degree in Vocal Performance and Pedagogy in 1993.

Dr. Ballard’s first full-time collegiate teaching appointment came that same year when he was hired on a national search to be Director of Opera and Visiting Assistant Professor of Music at Susquehanna University. He served there for two years before accepting another appointment as opera director at Western Oregon University, where he also served for two years. During this time, he appeared in principal roles with the Eugene Opera of Oregon and with two international festivals – the Rome Festival and Operafestival di Roma, where he also served as vocal coach/accompanist on faculty in 1996. In 1997, he was selected nationally as the new Director of Opera Theatre and Assistant Professor of Voice Performance at Ball State University in Muncie, Indiana, where he served for seven years on the voice faculty. During this time, he appeared frequently in collaboration with classical guitarist Paul Reilly, in duo recitals at Harvard University, Vanderbilt University, Coe College, and at Ball State University, among others. He also appeared as a soloist several times with the Muncie Symphony Orchestra, most notably as one of “Our Three Tenors” along with Fritz Robertson and John Hines.

In the summer of 2004, he embarked on an exciting new venture he had always envisioned — free-lance teaching and performing. He opened his first home studio in Muncie, Indiana, that year and also began teaching at St. Luke’s United Methodist Church in Indianapolis. In 2017, he moved to Indianapolis, further expanding his private studios. He now has three studios:  The Indianapolis home studio, the original Muncie studio, and a satellite studio at St. Paul’s Episcopal Church (in Indy).

Dr. Ballard prides himself on working with students of all backgrounds, ages, and levels of artistry. He enjoys the privilege of working with each and every one of his students no matter what level or age. His current voice and piano students range in age from 5 to over 80, have varied backgrounds and goals, and represent every level from first-time beginning students to seasoned professional artists.

Over the past thirty-two years, Dr. Jeffrey Ballard has taught more than 700 voice students at six universities and privately from his various home-based studios. He has supervised undergraduate, master’s, and doctoral recitals and performance projects in voice performance, guided musical theatre majors preparing for auditions in New York and various other places, helped singers rehabilitate their voices from various maladies and vocal abuse situations, coached intermediate and advanced singers in preparing for opera auditions and recitals, guided beginning singers and pianists in basic fundamentals of technique and musicianship, and has taught older adults taking voice for the first time or after extended periods of vocal inactivity. With all of his students, his approach is based on two major tenets: 1) building a sound and reliable technical foundation; and, 2) fostering creativity, confidence, and self-reliance. He believes that nearly everyone can learn to sing and develop his or her voice at any age and regardless of background, provided he or she commits to the process and works at the necessary skill development on a consistent basis. He enjoys working with a wide variety of age groups, backgrounds, and musical levels. Primarily a classical singer himself, he teaches vocal technique from a classical bel canto paradigm, but believes these sound fundamentals of vocalism can be applied to nearly any style or genre for rewarding, healthy, vibrant, lifelong singing.

Since completing his doctorate in vocal performance in 1993, Dr. Ballard has continued to study voice himself. In 1994, he began private study with one of the most sought-after and recognized master teachers of singing in the world – Dr. Thomas Houser. Through his extensive pedagogical work with Dr. Houser for 18 years (1994 to Dr. Houser’s death in 2012), Dr. Ballard continued to improve his own vocal skills while developing a clear understanding of the essential elements involved in training voices at any level. Vocal technique development and musical refinement were primary focuses of his work with Dr. Houser, and it continues to be invaluable to him as he works with a wide array of singers in his own studio.  From 2013 to 2014, Dr. Ballard studied with Karen Brunssen, International Clinician and Associate Professor of Voice at Northwestern University, Chicago, also the current President of NATS (National Association of Teachers of Singing).  And since 2019, he has studied with esteemed New York City soprano and voice teacher Dorothy Stone, herself a longtime protégé of Cornelius Reid, one of the most important vocal pedagogues of the 20th century.

Dr. Ballard was selected in 1997 as a promising young college voice teacher through the National Intern Program of the National Association of Teachers of Singing (NATS). He also is a past winner of the NATS Artist Awards competition in the state of Mississippi.  Two of his scholarly articles received widespread attention through publication in Journal of Singing, the nation’s premiere voice teaching journal:

Jeff is the proud father of a daughter and a son, both young adults now.  He enjoys savoring espresso at home or at various independent coffee shops around Indianapolis.

Download "Twelve (12) Steps to Vocal Development' by Dr. Jeffrey Ballard and start to move toward achieving your potential as a singer TODAY!